Based on the concept of ‘aging’ as a cultural construct according to Margaret Morganroth Gullette, and the understanding of ‘care’ as form of living together interdependently in the sense of Joan Tronto, this doctoral symposium brings together upcoming scholars in the field of Aging and Care, and provides a platform to discuss aspects of their dissertations and ongoing bodies of work. The Age and Care Research Group Graz appreciates the academic involvement of emerging scholars and supports the interdisciplinary exchange on a global scale. Thus, this symposium offers its participants a space that allows for an interdisciplinary discussion and supports the foundation of a global pre-doctoral network at an early career stage.

The symposium is organized by the Doctoral Student Group of the Age and Care Research Group Graz and will be held twice a year, one symposium held in the Spring, and the second one in the Fall. By collaborating with partners outside the research group, the symposium offers young researchers a networking platform at an early stage of their academic work. It also makes current and ongoing research at the four universities in Graz visible and offers an early-career-platform within the Age and Care Research Group Graz.

"Aging in Neverland: Reimagining the Space of the Nursing Home in Leonora Carrington's The Hearing Trumpet"

“Social space of the Elderly”

"Aging, migration and the question of justice"

"The Elderly Cyborg in Transhuman Fiction"

"Coping with losses in family caregiving of people with senile dementia"

“Needs and wishes of nursing home residents with depression”

"Memory and Food: Toward a Feminist Representation of Trauma" 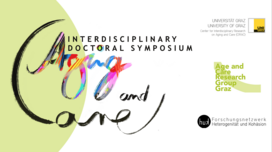 Center for Interdisciplinary Research on Aging and Care